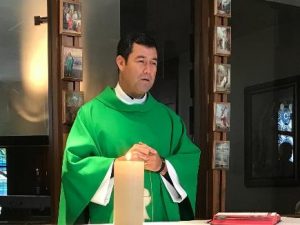 The gift of giving: Today’s Gospel confronts us with a daily reality in our life: that of giving. Wanting it or not, every day we have to give many things, from favors and charities to hugs and kisses. Giving is a characteristic of humanity. Animals, in the strict sense, do not give anything. The ability to give is the privilege of the human being. And it is also, in a way, for each one the measure of his humanity. When Mother Teresa of Calcutta said that we must “give unit it hurts,” she was inviting us to be more human. In this sense, the more we give the more we are human. God gave us the gift of giving to grow as persons.

Giving is valuing: By giving we define what we value. What we really value is what we put our time, effort, and money into. ” Tell me what you spend on, and I’ll tell you who you are”. In today’s gospel, the widow gave her time, effort, and money to the temple. She valued the temple more than her life. That is why Jesus said: “In her poverty, she has thrown all she had to live”. She valued God, whose house is the temple. Man has always felt the inner need to give God his goods, as a gesture of praise, gratitude, forgiveness, and supplication.

The human being does well to seek to honor God with the best that he can offer. Jesus himself, far from being outraged by the fact that that woman gave the temple what she had to live on, praises her gesture. Of course, the Church also has the absolute duty to help the poor. The Church cannot honor the Body of Christ with golden vessels while Christ himself dies of hunger in the body of the poor, as Saint John Chrysostom pointed out. However, it is not a question of omitting the worship of God to attend to the poor. We have to do one and the other. In fact, the Catholic Church is by far the most charitable institution in the world.

Giving is giving back: The widow’s offering also has another meaning. When we give something, we actually give it back. Nothing is ours. Although wealth and earnings are the legitimate fruit of our efforts, they are still a gift of God. In fact, there are more talented,  hard-working, and enthusiastic people who do not have what others have with less talent, work, and effort. Nobody can feel owner in the strict sense of what he has. We are all stewards of what was entrusted to us for a purpose that goes beyond personal interest.

By giving we only return what we have received. That is why the Social Doctrine of the Church insists so much. The gifts and charisms that we have received should benefit others. We all owe each other, St. Gregory the Great said: “When we give the poor things that are indispensable, we do not give them personal gifts, but we give them back what is theirs”. More than performing an act of charity, what we do is fulfill a duty of justice.

To give is freedom: Giving has, finally, a personal and spiritual benefit of great value: the affective and effective detachment of what we have. The Bible warns: “Though your wealth increases, do not give your heart to them”. Thinking that having something will make you happy is an illusion. As someone has said: if you are not happy with what you have, you will not be happy with what you lack either. Happiness tends to go in the opposite direction: the more you give, the more you let go, the more it grows. Giving is a source of joy.  We have all experienced it. And it is that our heart has a mechanism by which when giving feels full, and free. No one enjoys things as much as someone who does not feel tied to them.

Mary, the example of generosity: Today’s widow is the last character that Mark’s Gospel presents before the Passion of Christ. Jesus sits before someone who is symbolizing the gift of his own life. But He also sits before a woman who symbolizes Mary, His mother. By then, surely Mary was already a widow. And she was about to give much more than “what she had to live on”: her own Son. Mary thus became the highest example of human generosity. May she grant us the grace to understand more and more that giving is valuing, giving back, and reaching the freedom of the heart.

Thank you for your generosity, Fr. Fidel